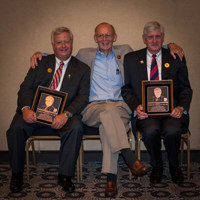 MASON, Mich. (July 27, 2014) – William Sheridan, founder and president of Sheridan Realty & Auction Company, received the auction industry’s most prestigious honor recently when he was inducted into the National Auctioneers Association Hall of Fame.

In keeping with NAA tradition, Sheridan was not told of the honor until the association’s annual Conference & Show, held in Louisville, Ky. His family and work associates surprised him by streaming in from the rear of the room as he was being introduced by Larry Theurer, of Wellington, Kansas, a 2007 inductee.

“It was a great pleasure to introduce Bill, who has been a true leader for years and has always had the good of the NAA at heart,” said Theurer.

Sheridan described himself as being “surprised and filled with gratitude” for the recognition. “The members of the Hall of Fame are truly giants in the auction industry, and it is humbling to be numbered among them,” he said.

“This will make it all the more meaningful Aug. 20 when another Hall of Fame member, Spanky Assiter, joins us in Owosso for the auction of the Mitchell Car Museum’s collection of classic automobiles,” said Sheridan.

Also inducted into the Hall of Fame were Rex Schrader, of Columbia City, Ind., and Tommy Rowell, of Moultrie, Ga.

Sheridan has served as president of the NAA and was 2002 International Auctioneer Champion. 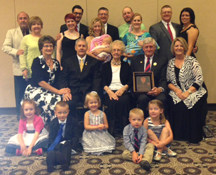