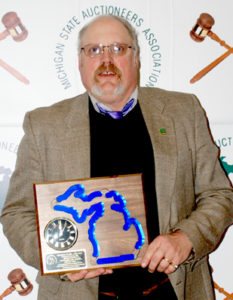 I attended auctions with my parents as a child. The first auction I can remember was our farm auction in 1958. In 1979 and 1980 I was asked by my mothers family to act as the auctioneer for my Grandfathers estate auction (this auction was open to family only). I enjoyed this so much I decided to go to auction school. After saving up the money for school I attended Reppert auction school in 1989. During the start of my auction career I worked for General Motors as a skilled trades Millwright from 1973 to 2002. I retired after 30 years. At the same time I was in the Army/Army National Guards from 1971 to 1992. I was a Chief Warrant Officer responsible for an engineer company maintenance in South Haven, Mi.

In the beginning of my auction career I worked for many other auction companies where I continued to learn the auction business.

I met Eva in 1991, our first date was a benefit auction(this was the first auction she ever attended) and I had her clerk. She worked at St. Mary’s Hospital for 30 years full time and after we met helped me with auctions on the weekends. We married in 1994.

Back in the day auctioneers like me were called part time auctioneers, which was true, we worked our full time jobs and did auctions on the weekends. We did estate, benefit, business liquidations, real estate auctions and online auctions. In 2003 we purchased our auction house. Currently we conduct retail, estate and food auctions. We were contacted by U-Haul in 2000 to do their storage auctions, and that’s where the fun began and the storage auctions began to grow. We now do storage auctions all over Michigan and 19 other states. Others always talked about specializing in the auction business which is what happened to us with the storage auctions. Sometimes things happen which you need to recognize as an opportunity, be willing to try other things.

CAI taught me to look at things in a different way, accept the challenge to make it work.

Eva would like to have me retire but when you enjoy what you’re doing it’s hard to let go. Hopefully that will be in thefar future. Being inducted into the Hall Of Fame has been the highlight of my auction career.