NACE, MICHIGAN – Professional auctioneer, Jason Clark from Alma, Michigan took top honors at the GoToAuction.com Midwest Auctioneer Championship – one of the most popular auctioneer competitions in the nation.

The Champion, Jason Clark was born and raised on a small dairy farm and exposed to a lot of auctions. One of his earliest memories of an auction was a small farm liquidation that his Uncle Dick and Bill Clark conducted north of Breckenridge, Michigan. Clark says, “I remember this sale because it was the first sale I felt the excitement of the auctioneer saying ‘SOLD’ to me personally. I was bidding on a small two-wheel trailer that I could haul my pig manure in. I remember the excitement of the auction, with the huge crowd of people standing around and visiting, the auctioneers on the loudspeakers, and the food wagon – it seemed more like the county fair than an auction!” Determined to be a good auctioneer like his Uncle Dick, he practiced around the farm and sold a lot of cattle off a 4010 John Deere while feeding them. He didn’t realize it at the time, but pretty much everyone around the farm could hear him, but instead of laughing, they encouraged him.

That encouragement led to his first paying job with John Tomaschko working as a contract auctioneer. After four years working for other auctioneers, he felt comfortable enough to be in business on his own and purchased Pioneer Auction Service from his Uncle Dick. Over the fifteen years he’s been in the industry, he’s competed five times in the Michigan Auctioneer Championship. The first few times, his nerves got the best of him and was so hard on himself he didn’t come back for a few years. Every time he competed, he felt he left as a better auctioneer, so he kept trying. In 2020, took home the Championship.  “I’m proud to say that I have worked hard to become all of these things thanks to the help and encouragement from others. I would strongly encourage any auctioneer to become a member of the Michigan Auctioneers Association and to compete in the available competitions. You will better yourself and your auction business all around.”  This was the first time Jason competed in the GoToAuction.com Midwest Auctioneer Championship.  He said “The appeal of this contest is that it’s all about bid calling.  I was nervous, but not having an interview made it less nervewracking.” Jason dedicated his win to his Dad and his Uncle Dick, who have both passed in the last two years.

The GoToAuction.com Midwest Auctioneer Championship was broadcasted live to a worldwide audience.  If you missed it, the videos are available on www.youtube.com/michiganauctioneers. “This is a unique competition in the sense there isn’t much in the way of rules – other than they must wear a hat, any hat and sell what they are selling within a two-minute time frame. Contestants are scored exclusively on their real-world auction chant – and man, do they put on an authentic show!” Said GoToAuction.com co-founder and Marketing Director, Kenny Lindsay, CAI. 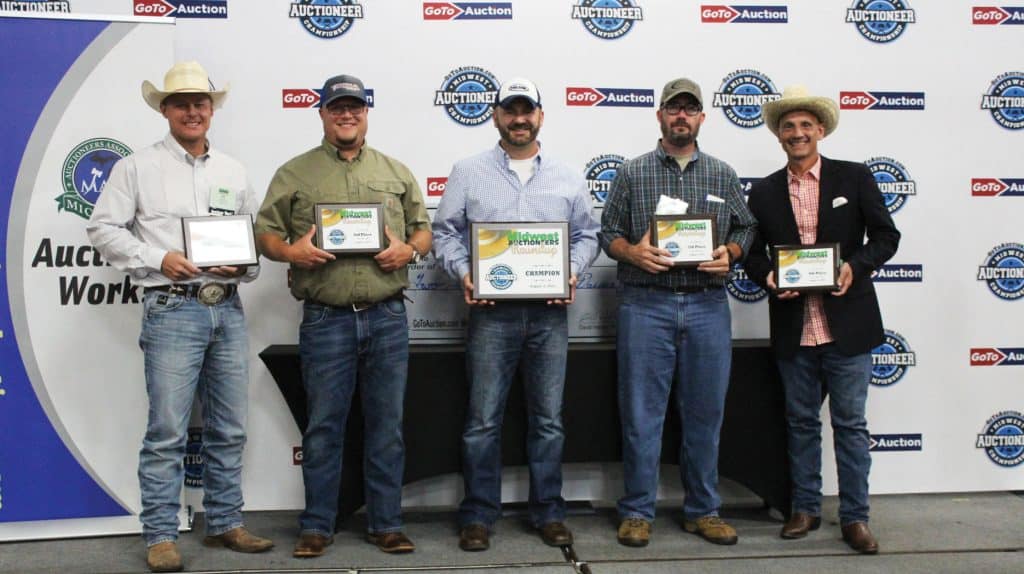