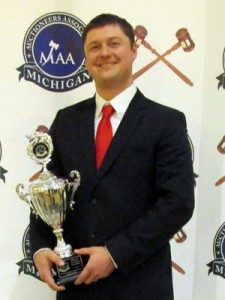 Also taking home honors were John Beechy and Grant Cole. Beechy was 1st Runner up and Graber was 2nd Runner up.

Wade Leist is a 35 year old, 2nd generation auctioneer. He started in the auction profession as a ticket runner like many other 2nd generation auctioneers. He then helped with clerking, cashiering, set-up and ringman before becoming a bid caller. In about 2002, he called his first auction at the Lake Odessa Stockyards calling bids for Leon Casey and Russ Easey. Russ Easey was the auctioneer on that day. Unannounced, Russ set the mic down and walked off saying “your turn boy!”

After his initiation in Lake Odessa, he began assisting his dad with bid calling for his auction company, Frank Leist Auction Service. In 2004, Wade and his brother, Ed, went to World Wide College of Auctioneering in Mason City, IA. They graduated and returned to Michigan with a full head of steam. Their dad made them working partners in the company along with cousin Jerry Schmoldt, and it is now called Leist Auctioneers. They specialize in farm, estate, real estate and also benefit auctions. Wade particularly enjoys conducting benefit auctions and his highly sought after as a benefit auctioneer. 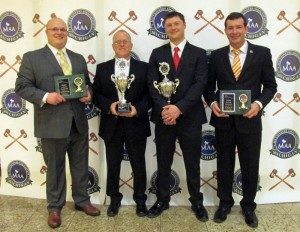 Wade joined the Michigan Auctioneers Association in 2004 and attended his first convention in 2005. He enjoys the friendships, programs, education and networking that the association offers its members. In 2006, he entered his first Michigan Auctioneer Championship. In 2012, 2013 and 2014 he finished as MAC Runner-up to champions Henry Detwiler, Jimmy Lambert and Laura Mantle. In 2012, he was elected to serve a 3 year term as Board of Director. At the 2015 conference he was elected as Vice President.

In 2013, he married his beautiful wife Sarah. They have 3 daughters, Morgan 9 yo, Katie 5 yo and Aubrey 8 months old. They make their home in Boyne City MI where they also run a horse leasing operation, North Bay Horse Co. They lease over 100 horses to summer riding camps throughout the state of Michigan during the summer months. Their family enjoys camping, riding the Harley and participating in sporting events.