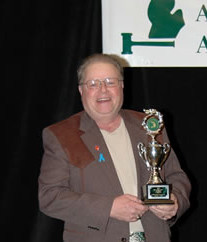 Michael H. Bliss of Mt. Pleasant, MI won the coveted title, Michigan Ringman Champion, Thursday, January 22, 2009. Mike is a Past President of the Michigan State Auctioneers Association and has been an auctioneer for nearly 30 years. He is also the 2004 Michigan Auctioneer Champion. Upon his graduation of Mendenhall School of Auctioneering, Mike was awarded the coveted “Most Likely to Succeed” plaque by his 93 classmates. Mike has worked with many auctioneers as a contract auctioneer in addition to his own auction business. He prides himself on being very well versed in many areas of expertise connected with the auction business including guns, sporting goods, ATV’s, farm animals, furniture and shop equipment just to name a few.