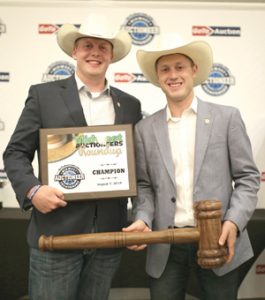 Upon receiving the GoToAuction.com Midwest Auctioneer Championship purse of $2,500 and the championship award, Peyton was visibly taken aback “Wow. I can’t believe it. Wow.” Taking a few moments to compose himself, he said, “There is one person I really want to thank…..and that’s God. I want to thank God for blessing me to be an auctioneer and letting me do this. I’ve been wanting to be an auctioneer since I was five years old. I knew that’s what I wanted to do. Ever since I went to that first auction, I was hooked and I’ve made my dream come true and became an auctioneer.” Peyton went on to thank his beautiful fiancé, Katie Bratton for her unwavering support, his parents, the Michigan Auctioneers Association, GoToAuction.com and dozens of others that were pivotal in his early successes as a professional auctioneer.

One of the judges commented, “This was a really difficult championship to judge based on the overwhelming amount of talent. We were looking at accomplished auctioneers that compete on the national level. However, it was many of the lesser known names that do not compete in similar contests that kept this competition especially tight. In the end, Peyton amassed the most points.”

The GoToAuction.com Midwest Auctioneer Championship was broadcasted live to a worldwide audience. “This is an unique competition in the sense their isn’t much in the way of rules – other than they must wear a hat, any kind of hat and sell what they are selling within a two minute time frame. Contestants are scored exclusively on their real-world auction chant – and man, do they put on an authentic show!” Said GoToAuction.com co-founder and Marketing Director, Kenny Lindsay, CAI. 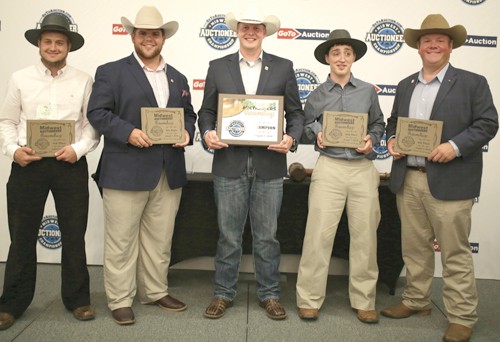