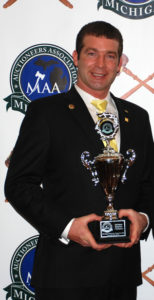 Auctioneer John Beechy was awarded the honor of 2014 Michigan Ringman Champion on January 29, 2014 at the Michigan Auctioneers Association Annual Conference in Lansing, Michigan. 10 Contestants competed for the coveted title. Contestants were judged by a panel of 5 past Michigan Auctioneer Champions. They were judged on 4 categories: Crowd/Buyer Interaction, Performance, Relaying Bids and Communication with their Auctioneer, and Appearance/Presence.

John began his auction career in the spring of 2009 after graduating Reppert Auction School. John began assisting other auction companies on auction day, which led him to selling 3 to 5 auctions a week. He currently sells at 2 auto auctions every week and 1 weekly antique consignment auction. On other days you will see him assisting other auction companies selling horses, equipment, household, and much more. He is the owner of J&B Auctions of Nappanee, Indiana. He is a proud member of the Indiana Auctioneers Association, the Michigan Auctioneers Association and the National Auctioneers Association. John is currently the 2013 Indiana Auctioneer Champion and now the 2014 Michigan Ringman Champion. John says that he has truly been blessed in the auction business and is excited to see what the future holds.