BURNS INDUCTED INTO THE MICHIGAN AUCTIONEERS HALL OF FAME 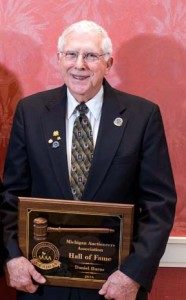 Dan conducted auctions in over 8 different counties. He sold a variety of items including turtle eye drops from a pet shop, a giant elephant from a roof top, hundreds of tables and chairs for Grand Valley State University, a large blueberry farm with all the equipment, an auto body repair shop, animal cages from a circus, furnishings of the large three-story Herpolsheimers Department Store in downtown Grand Rapids, a one room schoolhouse that was purchased to be a museum, dozens of estates, farm machinery, cattle and horses, a lumber yard, restaurant equipment and furnishings.

Dan also served in the US Army and Army reserves; as well as working for 30 years for the Grand Rapids Home for Veterans as the Executive Housekeeper overseeing 50 employees. Dan & Nancy live in a house they built on some of the land of the Burns family home where Dan was born in Rockford, Michigan. Dan has lived all but 6 years of his life on this land. Dan and Nancy have a total of 6 children, 14 grandchildren and 25 great grandchildren.