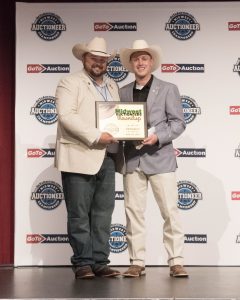 Upon receiving the championship purse of $2,000 and the championship award, the emotional Troyer commented, “I want to thank God for giving me the ability to do the things I do. I want to thank my wife who is always there for me.” He added, “It’s been a big year for us. We just bought a house, got a baby on the way. Yeah. This is just awesome.”

One of the judges commented, “This was a really difficult championship to judge based on the overwhelming amount of talent. 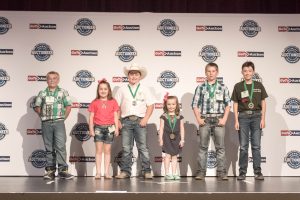 We were looking at accomplished auctioneers that compete on the national level. However, it was many of the lesser known names that do not compete in similar contests that kept this competition especially tight. In the end, Troyer amassed the most points.”

Not to be outdone by the intense competition, the fan favorite of the evening was the kids auction. Aspiring young auctioneers from 4 years and up climbed up on stage to show off their budding talents.  Parents, grandparents, friends and family all supported these young auctioneers by bidding high and often on the items they auctioned, generating thunderous applause for each up and coming champion.

The GoToAuction.com Midwest Auctioneer Championship was broadcasted live on YouTube with an incredible amount of social media buzz leading up to the popular contest.   “Anyone in the world had the opportunity to see the stars shine on the big stage – and they were not disappointed. The contest generated a lot of fanfare.” Said GoToAuction.com Vice President and Marketing Director, Kenny Lindsay.