William Podell graduated from Reisch American School of Auctioneering in Mason City, Iowa in August of 1956. Shortly after that, he joined the Michigan State Auctioneers Association, and the National Auctioneers Association. He is a past president and long standing board member of the MAA. In 1966, he made the obligation to invest in both the state and national association by paying into the life membership funds of both organizations. After graduation from Reisch, Bill formed Wm. Podell Co. Auctioneers, specializing in industrial and commercial machinery and equipment auctions. Upon marriage in 1960, his wife, Esther, became active in the auction business with him. She did everything from answer the phone to typing to cashiering at the auctions. 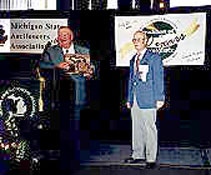 Bill has always been very active with different charity auctions. He started the CACHE (Caring About Catholic High School Education) auction, which has been a success ever since. Bill is still active in the auction industry as well as the appraisal aspect of the field. He is a great asset to the auction industry and a great addition to the ranks of the Hall of Fame.