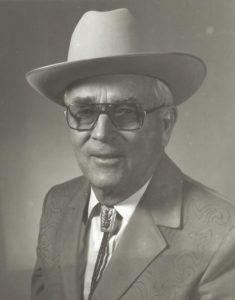 Stan Perkins became a life member of the MAA about 50 years ago at the Annual Meeting in a roadhouse on US 27 about 5 miles North of Jackson. Dues were $5.00 a year when a dollar was worth full value. The organization was dead broke. Stan made a motion that the association sell Life Memberships to provide instant relief at $50.00 each and backed his statement with a check. Two others also supported his motion with checks (Ray Tosch and C.B. Smith). The association was in business with $150.00 in the Treasurer’s hand.

He wrote “Itinerant Auctioneering” at the request of MSU. It has been shipped to every state in the Union. All of his books are on Michigan. This book for MSU was no exception. He has crusaded for a license for Michigan Auctioneers in an attempt to upbraid the auction profession with full credits to the MAA.

Stan is a Past Secretary and Director of the Michigan State Auctioneers Association and a long time auctioneer.