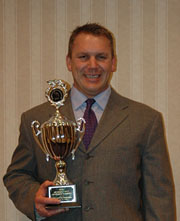 Scott A. Miedema of Byron Center, MI won the coveted title, Michigan Bid Calling Champion, Thursday, January 27, 2005. 22 Men and Women competed for the title, Michigan Bid Calling Champion 2005. Contestants are judged on their chant, or bid-calling, and the finalists are also judged on the interview portion of the contest. The Five Finalists were Scott Miedema of Byron Center, Richard J. Montgomery of Plymouth, Dan Samson of Escanaba, Dan Stone of Detroit and Mike Vander Schuur of Coopersville.

Scott is the Vice President of Miedema Auctioneering, Inc of Byron Center, MI. He is a past president of the MAA and has led educational seminars at MAA Convention as well as conventions of the National Auctioneers Association. He is a graduate of Grand Valley State University, Mendenhall Auction College and the International Society of Appraisers. Scott is also a member of the MAA, NAA, ISA (International Society of Appraisers) and the Industrial Auctioneers Association.