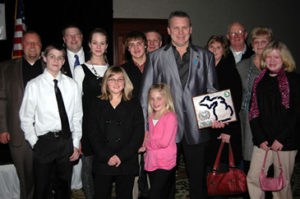 Scott Miedema was proudly inducted into the Michigan State Auctioneers Association Hall of Fame at the President’s Banquet of the MAA Annual Conference in Dearborn on January 23, 2009. Miedema is the Chief Operating Officer and Co-owner of Miedema Auctioneering Inc., Repocast.com, Orbitbid.com, Lastbidrealestate.com and Miedema Appraisals Inc. He is a graduate of Grand Valley State University with a BS in Psychology (Business emphasis) and is currently pursuing his MBA from Grand Canyon University. Scott also attended Davenport Business College and is a graduate of Mendenhall Auction School and the International Society of Appraisers.

Scott is the father of two children Alexis and Austin. He in Grand Rapids Michigan, attends Cross Roads Bible Church and serves as a School Board Member Northpointe Christian School. The MAA is proud to present their highest honor to Scott by inducting him into the MAA’s Hall of Fame.