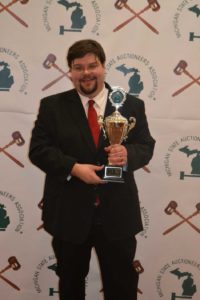 Gehres is a first generation auctioneer and Realtor currently based in Columbus, Ohio. He is the Vice President of Auction Operations for United Country Gryphon Realty & Auction Group, the owner of Belhorn Auctions and the co-founder of The Super Auction event. He is also a professional speaker and teaches at The Ohio Auction School, Reppert School of Auctioneering and state and national conventions.

Gehres splits his time between Columbus, Ohio and his family farm in Van Wert which has been handed down from father to son since 1875. In December of 2011 Peter and his wife Paige welcomed twin boys, Abraham and Oliver, into the world. He is an active volunteer and support of the FFA, 4-H and Junior Achievement.