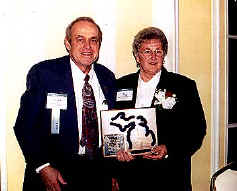 A popular auctioneer died Tuesday, August 2, at the age of 60, after a long battle with cancer. Lloyd R. Braun, of Webster Township, was a partner in Braun and Helmer Auction Service Inc. He was inducted last year into the MAA Hall of Fame after more than 20 years of auctioneering.

Lloyd was diagnosed with cancer in 1994. He had radiation and chemotherapy treatments and a stem cell transplant. He died at home.

Braun farmed and then worked as a barber in Nickels Arcade in Ann Arbor before he and friend Jerry Helmer decided to go to auctioneer school in the early 1970’s. He had a sharp eye, once catching a bidder who signaled by tugging on his pants cuff. The pair sold everything from hair pins to harvesters. Braun would prop a foot on a piece of farm equipment, occasionally plunk a straw hat on his head, prop himself on a yardstick and “push from the diaphragm” like an opera singer, to avoid wear and tear on his voice.

Daughter Diane DeVoogd, who was with her father when he died, said he “was a helping person. He loved to be able to help a person finish a project. He had 10 extra parts of everything, and if someone needed a part for something, he would hate it if they would go to the hardware store without checking with him first.”

He was particularly close to his only grandchild, almost 3-year-old Kyle DeVoogd, she said. “They were best pals. They would get out an old machinery catalog, and sit for hours, talking about machinery and drawing,” she said.

Braun conducted benefit auctions for Chelsea Hospital, Gabriel Richard High School, and the Millie Schembechler Fund, among others. He served as president of the MAA, and was elected into the Hall of Fame in 1998.

He also is survived by Joyce, his wife of 35 years, son Brian, and his mother and sister. 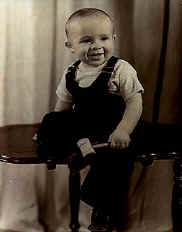