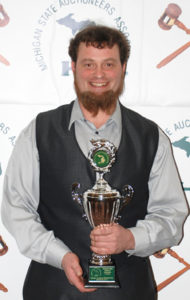 Auctioneer Leroy Yoder was awarded the honor of 2013 Michigan Ringman Champion on January 23, 2013 at the Michigan State Auctioneers Association Annual Conference in Lansing, Michigan. 7 Contestants competed for the coveted title. Contestants were judged by a panel of 5 top auctioneers and auction school instructors. They were judged on 4 categories: Crowd/Buyer Interaction, Performance, Relaying Bids & Communication with their Auctioneer, and Appearance/Presence.

As a little boy, growing up on a dairy farm, Leroy always enjoyed practicing auctioneering. He spent a lot of time practicing in the silo, while throwing silage down or in the milk house while washing milkers. His mother always told him he should be an auctioneer as she thought he talked too much and asked too many questions. Leroy and his brother Willis always talked about going to auction school, and when old enough, they did. Leroy attended Reppert Auction school in 1993. Their first auction was their Dad’s farm auction. They also helped a local auctioneer sell antiques when they first got started. They found there was more to the auction business than standing on a ladder and calling bids on sale day.

Leroy and Willis still work together on their larger auctions, since Willis moved to Indiana a few years back. Leroy continues the business with his family and enjoys working with other auctioneers. Leroy lives in Clare, Michigan with his wife, Lydia Ann, and their 5 children. His hobbies include coyote and rabbit hunting with his dogs. He also enjoys going to other people’s auctions. He’s had many interesting experiences in the auction industry and enjoys working with the people. Leroy is the 1996 Michigan State Auctioneers Association Bid Calling Champion and MAA’s 2011 Pennsylvania Dutch Bid Calling Champion, and the Michigan Ringman Champion 2013.