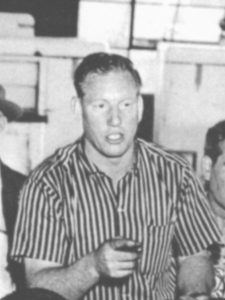 Leo “Red” Merritt is a 1951 graduate of Reppert School of Auctioneering. He was inducted into the Hall of Fame on January 24, 1997. He is President of Merritt Auction Service in Greenville, MI, which he started in 1951. Then he took on his son, Doug, as Vice President in 1980. Grandson, Tim Tobey, joined in 1998.

Red has conducted over 10,000 auctions, including 6,000 automobile auctions that spanned from Canada to St. Louis, Chicago, and the entire State of Michigan. He was President of the MAA in 1974. He holds a Real Estate License and also does many appraisals for Old Kent bank.

Red has served the city of Greenville with 2 year terms on the city council. In 1998, he earned the city’s most coveted award for oustanding service, the Marion E. Kemp Outstanding Citizen Award. He is a past commander of the American Legion, and a charter member of the Greenville Moose Lodge. He faithfully attends First Congregational Church in Greenville, where he sings in the choir and was previously Church Moderator.

His spare time, finds him singing, golfing and dancing. He is responsible for 90% of the charity Auctions that are conducted around Montcalm County; a few include Michigan Whitetails, Ducks Unlimited, Rotary, Lions, Faith Christian Community Schools, Domestic Violence Shelter and more.