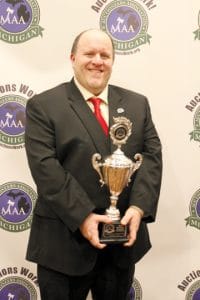 Frankenmuth, Michigan – Auctioneer Kenny Lindsay was awarded the honor of 2018 Michigan Ringman Champion on February 1, 2018 at the Michigan Auctioneers Association Annual Conference in Frankenmuth, Michigan. 7 Contestants competed for the coveted title. Contestants were judged by a panel of 5 accomplished Michigan & International Auctioneer Champions. They were judged on 4 categories: Crowd/Buyer Interaction, Performance, Relaying Bids and Communication with their Auctioneer, and Appearance/Presence. Also taking home honors were David Herschberger, 1st Runner Up, and Mike Furlo, 2nd Runner Up.

Kenny has a long history in the Auction Industry. He began his career in 2002 after attending Continental Auction School, where he is now an instructor. Kenny has taught seminars at several state and National Auctioneers Association conferences, leading sessions on Negotiating, Autographs, Salesmanship and much more. Kenny served many years on the Board of Directors of the Michigan Auctioneers Association, serving as President in 2014. He is still involved with the MAA by continuing to serve as co-chairman of the Public Promotions Committee, promoting the Auction Industry to the public through the national #AuctionsWork campaign.