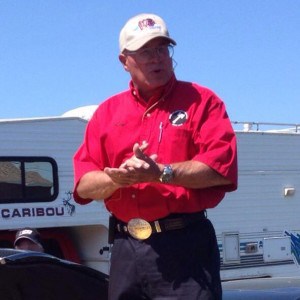 First you hear the voice – “GOTABUYHERE…SOLD!”

Then you see the name Thurlow and you think, “Boy, I’ve heard that name.” Then you meet the man. Everyone has something nice to say about Ken Thurlow because, well, he’s a nice guy.

I’d never met Ken Thurlow until recently. Oh sure, I’ve heard that smooth auctioneer’s voice of his many times. If you’ve been to almost any kind of auction in the last 33 years around here you’ve probably heard him sing out to the crowd. I’ve watched him race at the Michigan County Fairs for years – a pretty decent driver/trainer of harness horses.

You might ask why that name Thurlow is so familiar. Ken’s grandfather helped survey this area.

His father was born on the Thurlow homestead 99 years ago and Ken still lives there today. There just aren’t many people around who haven’t heard the name.

Ken grew up with livestock and auctions, as his father was a livestock dealer. So it seems only natural that Ken would give auctioneering a try. He worked many sales before ever stepping into the box. A few jobs here and there evolved into Thurlow Auction Service, Inc. in 1973.

His wife, Joyce, has served as his primary clerk for that entire time as well as mother and chief cook and bottle washer for the Thurlow clan. They are the proud parents of three college graduates – Kable works with his father in the auction business, raises cattle and serves as an extension agriculture agent for Gladwin and Clare Counties; Brenda operates a day-care facility; and Constance is a banker.

Auctions are a fun activity but also a serious business. The auctioneer is responsible for many things but primarily the flow of money – from one pocket to another. Ken makes his living with his voice but after a little coaxing I got him to sit down and talk for free.

ROR: How did you learn to be an auctioneer? Did you go to auctioneer school? Do you have to be licensed?

Ken: Nah, anybody can be an auctioneer. I’m living proof, and Michigan doesn’t require a license.

ROR: So you taught yourself?

Ken: Basically, yes. I hauled livestock to auctions for my father for many years and practiced my technique going down the road. Our trucks never had radios. I sold thousands of cows to those bidders beyond the windshield. My dad sent my nephew to auction school and I went to help him on his first job over at the Pinconning Schools auction.

About a half hour before the sale started he came up to me and said, “I’m too nervous, we’ve gotta get outta here.” Well, I talked him into staying and said I’d help by starting the sale in the box – didn’t even really know what I was doing.

Later on I was dropping off some livestock at a sale and the owner came out and said, “You gotta help me, my auctioneer never showed.” So I sold his stock and I must have done all right because he just kept hiring me to come back.

ROR: Do you get nervous before an auction?

Ken: No. You try to have a good time and try to help the bidders have a little fun too. People who are having fun will spend more money. I’ll tell you a time when I got REALLY nervous years ago. I got a call to substitute for an auctioneer up in Petoskey at a wine auction. Can you imagine me in a tuxedo selling wine? We had people coming in from all over the world, but the money was real good. I pulled it off and they had such a good sale they ask me back the next year on Mackinac Island but I turned ‘em down. I told them, “One times a charm, let’s not spoil it.”

ROR: What makes a good auctioneer?

Ken: First, you have to be easily understood. It’s pretty hard for anyone to support an auctioneer that they can’t understand. I always tell the young guys, “Fast is not necessarily good.” The speed comes with experience. You also need to have a feeling for your crowd, work them into the action. My dad told me something to always remember as an auctioneer: If you’re going to do business as an auctioneer, you have to be fair because you are working for two people – you have to make a living and so does the person selling.

Ken: Right now it’s probably real estate. It’s a fairly new concept in Michigan but in the southern states I’d guess up to 50 percent of real estate is sold at auctions. Usually the terms are 10 percent down with the sale closing in 30 days and that’s usually a big chunk of change.

ROR: Auctions can be strange events – what’s the strangest thing that ever happened to you?

Ken: A few years back at a sale up near Higgins Lake, I was just giving my opening statements and we had a black bear run right down through the crowd. He was really peeling; never stopped to look at anything or bid on anything, but it sure did liven up the crowd.

ROR: How can I tell if the auctioneer is running up the bid on me? And do you believe in reserve bids?

Ken: An honest auctioneer should never run you up. That’s a dishonest auctioneer and that’s a sale you should avoid in the future. Everybody has the right to put a price on anything they own. If I come in and see a lot of reserve bids on items, I’ll just shake hands and walk away. But I’ll also explain to them that those reserve bids are handcuffing my ability to make them money. I might be able to get the bidders close enough to an acceptable price. If you start bidding things in, you’ll have bidders walk and you can’t blame them.

ROR: You sell many things, but what do you enjoy selling the most?

Ken: I love to sell horses. I’ve had them all my life and I know a little something about them. I enjoy selling cars too. Now that is a fast sale. I do the Detroit Auction every Tuesday – the largest car auction in the Michigan, averaging around 2500 a day. They have twelve lanes going at once. Only the best get to sell ’em and I’m not too bad – I average a car every minute for dealer consignments. The best I ever saw was an auctioneer that averages one every 11 seconds – that’s fast.

ROR: You also train and driver trotters and pacers (Standardbred horses). Is that as thrilling as selling a car?

Ken: Well, I once sold a Dodge Viper for $82,000 and I won driving a pacing filly named Mischief Maker in Illinois going a good clip for good money. I didn’t own the car or the horse but they both were pretty exciting and very satisfying events.

ROR: Rumor has it you also own an airplane, so I assume you also have a pilot’s license?

Ken: I’ve got a Piper Cherokee airplane and had a license for nine years. An auctioneer has to go where the auction is so you have a tendency to put a lot of miles on your vehicle and hours on the road. I decided to shorten the time whenever I could with my plane.

ROR: I’ve heard you chanting from the auction box. What are you saying and would you chant a little for me?

Ken: I haven’t got a clue what I’m saying (laughing). Actually, I made a decision a long time ago to not sing unless I’m getting paid or it’s a charity auction and you’re buying.

Unfortunately, Ken was in an accident and after an extensive hospital stay in ICU, he passed away on October 4, 2014. We found this article online from 2007 and thought this was a great tribute to Ken. If you’d like to help Ken’s family by contributing to his hospital bills, please send to: Joyce Thurlow, 3157 Schmidt Road, Gladwin MI 48624