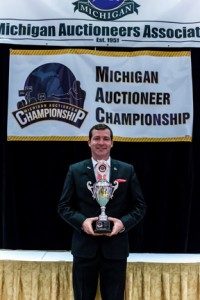 Also taking home honors were Frank E. Leist and Sara Rose. Rose was the 1st runner up and Leist was the 2nd runner up.

John began his auction career in the spring of 2009 after graduating from Reppert Auction School. He joined the Indiana and Michigan Auctioneers Associations shortly thereafter. John is currently traveling 3 to 4 states doing 5 to 7 auction’s per week selling automobiles, real estate, antiques, collector cars and charity auctions. John recently joined the Halderman Real Estate Services team assisting them with their real estate auction side. He also shares his expertise and talents with aspiring new auctioneers as an instructor at Reppert Auction School.

John is humbled and honored to be named the 2016 Michigan Champion he looks forward to representing the Michigan Auctioneer Association at the 2016 NAA Conference and Show in Grand Rapids in July.