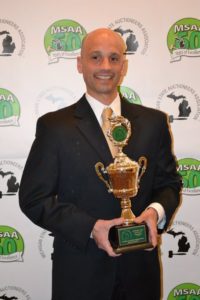 With over 20 years of experience, Jason Lamoreaux is a professional licensed auctioneer specializing in benefit, cattle and personal property auctions. Lamoreaux has traveled throughout the country serving auction clients and is the owner of Lamoreaux Auction and Appraisal LLC, headquartered in Belding, Michigan, which includes the subsidiaries CanAm Sales Management, Bovinebid.com, Bidderworks.com, and Pinnacle Benefit Auctions. Launching Bovinebid.com in 2008, Lamoreaux pioneered the expansion of domestic dairy genetic auctions to include online bidding worldwide. Lamoreaux graduated from the Missouri Auction School and is a member of the National Auctioneers Association and the Michigan State Auctioneers Association. He received a Bachelor’s Degree in Business Administration and Finance from Aquinas College and earned a Master’s Degree in Educational Leadership from Western Michigan University.

Lamoreaux applauded the MAA for its continued support of Michigan auctioneers. “The MAA strives to provide professionals with workshops, presentations and continuing education opportunities that enhance our abilities as auctioneers. This annual event is a celebration of what we do, and I am honored to represent the auction community of Michigan in 2011 as the Michigan Auctioneer Champion.” 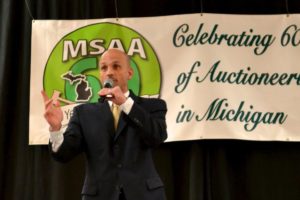