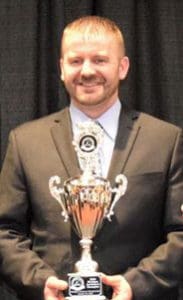 Also taking home honors were Ridge Bollheimer and Ashley Peters. Bollheimer was the 1st runner up and Peters was the 2nd runner up.

Clark was born and raised on a small dairy farm and exposed to a lot of auctions. One of his earliest memories of an auction was a small farm liquidation that his Uncle Dick and Bill Clark conducted north of Breckenridge, Michigan. Clark says, “I remember this sale because it was the first sale I felt the excitement of the auctioneer saying ‘SOLD’ to me personally. I was bidding on a small two-wheel trailer that I could haul my pig manure in. I remember the excitement of the auction, with the huge crowd of people standing around and visiting, the auctioneers on the loudspeakers, and the food wagon – it seemed more like the county fair than an auction!” Determined to be a good auctioneer like his Uncle Dick, he practiced around the farm and sold a lot of cattle off a 4010 John Deere while feeding them. He didn’t realize it at the time, but pretty much everyone around the farm could hear him, but instead of laughing, they encouraged him.

That encouragement led to his first paying job with John Tomaschko working as a contract auctioneer. After four years working for other auctioneers, he felt comfortable enough to be in business on his own and purchased Pioneer Auction Service from his Uncle Dick. Over the fourteen years he’s been in the industry, he’s competed five times in the Michigan Auctioneer Championship. The first few times, his nerves got the best of him and was so hard on himself he didn’t come back for a few years. Every time he competed, he felt he left as a better auctioneer, so he kept trying. In 2019, he finally made the finals and placed 2nd runner up. He was so glad he didn’t take time off this year because it felt more familiar than in years past. Jason says that winning the Championship is an honor and a highlight in his life. Ever since he was a little boy, he wanted to be a good father, farmer and an auctioneer. “I’m proud to say that I have worked hard to become all of these things thanks to the help and encouragement from others. I would strongly encourage any auctioneer to become a member of the Michigan Auctioneers Association and to compete in the Michigan Auctioneer Championship. You will better yourself and your auction business all around.” 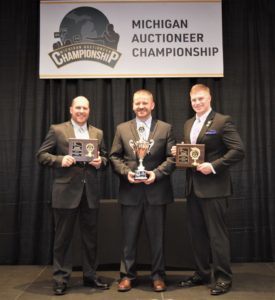