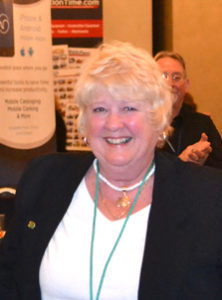 Gwyn has been an auctioneer since 1982 and a certified Auction and Real Estate Instructor since 1994. Six years ago, she created her own highly successful proprietary school, The Acme Institute. Gwyn’s education includes Delta College, University of Michigan, World Wide College of Auctioneering, Certified Auctioneers Institute and Auctioneer Accredited in Real Estate.

She wanted to buy a PA so she got her dealers license and talked a couple of other auctioneers into buying one too so she could buy enough to become a dealer, then she also started selling PA’s. Later on she went to real estate school, obtained her broker’s license and became a teacher. She taught for Holloway’s Institute for year before starting her own school. She has helped thousands of students get their salespersons and brokers licenses. Many of Gwyn’s classes focus on Auction law and helping Auctioneers expand their knowledge of the real estate market. Gwyn’s boundless energy and enthusiasm for her professions are legendary. Teaching, lobbying at the state level, constantly updating her professional data base and donating countless hours of her time for the causes she believes in are all what makes Gwyn Besner who she is. Gwyn’s love for the auction profession could only be overshadowed by her love for music and her grandchildren.