In Memory of our friend Gary Bender
Passed away on Tuesday, June 1, 2004 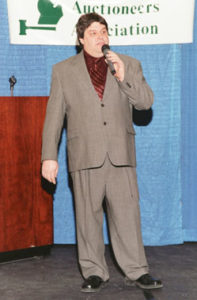 We sadly report the accidental death of our friend and colleague, Gary Bender.  Gary was a man who filled the room with his presence.  Those who knew him could depend on him to come up with a reason to laugh and remind us to enjoy life to the fullest.  He will be missed.  His colleagues who respected him will miss him because he was hard working, reliable and honest.  His close friends who loved him will miss him because he was devoted and loyal. He will be missed by his daughter, Jessica Bender, who knew that above all else, she was the most precious thing in his life.

Gary expressed an interest in learning the auction business in 1994.  In keeping with everything he started he threw himself into learning with every ounce of energy he had. Gary worked at every Smittendorf auction, determined to develop his skills and appreciation for the auction business. When Smittendorf Auctioneers joined with the Glassman’s, he quickly became a valued member of that auction team.

Gary graduated from Sturgis High School in 1977. He worked in various industries, taught himself construction skills and built his own home.  Gary was a big man who did things in a big way.

Reception at the Eagles after, then a “Wake” bonfire at Garys former residence.