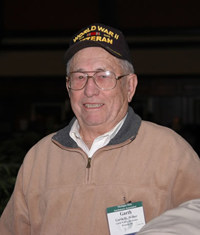 Garth W. Wilber, CAI of Bronson, Michigan has been in the Auction Business for 59 years. He is the 2nd of 4 generations of Auctioneers in his company. He has held or assisted on over 12,000 Auctions from Airplanes to horse manure. These Auctions were sized from $35.00 to $7 Million. Garth has worked with 6 Nation Wide Industrial Auction companies as an Auctioneer and Coordinator, selling in 21 states and Canada.

Garth was the 1st Auctioneer instructor for 2 years in CAI as well as the 1st instructing Auctioneer for Con-Ed in Kentucky. For many years, he held 6 regular Auctions per week. He has been hired by & assisted with Auctions by 20 Michigan Auctioneers, has held every office in the State, was Secretary/Treasurer for 15 years running, was an NAA Director and was on the 1st education committee starting NAA seminars and CAI. He was the National Chairman for the NAA Convention in Lansing in 1957 and is a member of the NAA Hall of Fame. In Garth’s free time, he spoke at National Seminars in 5 states and taught Auction School. Garth is now retired, but still works hard as an MAA Director and in an advisory position for many Auctioneers.