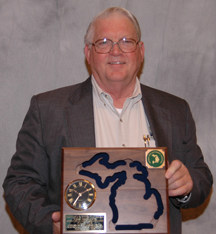 Ed King was proudly inducted into the Michigan State Auctioneers Association Hall of Fame at the President’s Banquet of the MAA Annual Conference in Bay City on February 1, 2008. He has an Associates Degree in Business Management and is a graduate of Missouri Auction School (1987), the Certified Auctioneers Institute (1997) and the Certified Appraisers Guild of America. In 1999, Ed won the Michigan State Auctioneers Association Bid Calling Championship in Grand Rapids and continues to compete nationally in the International Auctioneer Championships.

He has been in the auction business for over 20 years, working tirelessly as a contract auctioneer and servant to the auction industry. During his auction career, Ed has served as a board member as well as President, holding every office in the MAA during his years of dedicated service.

He is a seminar presenter for the MAA and is a member of Toastmasters with Advanced Silver and Advanced Leader designation. Ed shares his knowledge with young and old alike, speaking before Rotary, Optimist, Kiwinis & Church Groups on the Auction Profession, Drug abuse in the Elderly, Toastmasters & many more. He is active in his church as an Usher and Lay Distributor. He has worked at the Michigan Horse Auction for years where he started in the Auction Profession. He also worked at the Stockbridge Pitch Fork Auction. Ed has worked for so many auctioneers, they are too numerous to name. A few include: R.J. Montgomery, Williams & Lipton, Michael Fox Co, Hilco Industrial, Maynards, National Auction Group, Miedema Auctioneering, Brodie Corporation, TWI Auctioneers, Yoder Bros, Belchers, Albrechts, Dingman Spaulding and many more. He works over 230 Auctions a year as a contract Auctioneer selling business liquidations, commercial and heavy equipment, farm equipment, farm liquidations, estates, household, antiques, charity auctions, consignment sales and real estate auctions. He is a licensed Auctioneer in Florida, Ohio, Indiana and Pennsylvania.

He also conducts many benefit auctions for schools, churches, 4-H, Cub Scouts, Girl Scouts and individuals in need. He’s always doing extra things to help the association and MAA Members. Whether it be driving Amish Auctioneers around the country or welcoming new auctioneers at the conferences, Ed has never been the kind of guy to sit down and watch the world go by. He’s always looking for opportunities to be helpful. Ed’s dedication shows through in everything he does in life and for the auction industry. He may not always be on the block, but he’s always on the job.