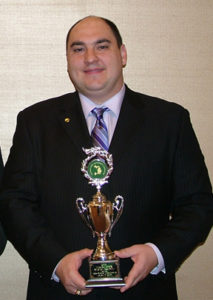 David G. Helmer of Saline , MI won the coveted title, Michigan Ringman Champion, Thursday, January 31, 2008. David and his wife Jennifer have three children, daughter Olivia and twin boys Luke and Caleb. He is a 1996 Graduate of Missouri Auction School, a life member of the Michigan State Auctioneers Association, a member of the National Auctioneers Association, and holds the Graduate Personal Property Appraiser (GPPA) designation from the Auction Marketing Institute.

David earned a Bachelor’s Degree in Communication / Marketing from Eastern Michigan University 1998. He is partner in a family run auction business that was started in 1971 and has been involved in over 750 Auctions including Real Estate, Antiques, Farm, and Benefits.

In his spare time, David is Treasurer and Auctioneer for the National Football League Alumni Detroit Chapter, serves on the fund raising Board for St. Joseph Hospital, and is a member of the Fellowship of Christian Auctioneers International. His pastimes include traveling, reading, collecting antiques and sports memorabilia. David is also a past President (2006) of the Michigan State Auctioneers Association and was the 2006 MAA Bid Calling Champion.