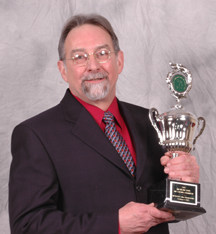 Over 200 attended the three-day event. 25 Men and Women competed for the title, Michigan Bid Calling Champion 2007. Samson has placed among the top 5 finalists of the competition for the past nine years. Contestants are judged on their chant, or bid-calling, prefissionalism, surveying the crowd, gestures, product description, appearance and poise. The top 5 finalists answered unrehearsed interview questions while facing the audience.