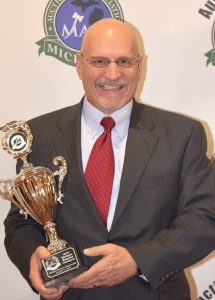 Mount Pleasant, Michigan – Auctioneer Bob Howe was awarded the honor of 2019 Michigan Ringman Champion on January 31, 2019 at the Michigan Auctioneers Association Annual Conference in Mount Pleasant, Michigan. 5 Contestants competed for the coveted title. Contestants were judged by a panel of 5 accomplished Michigan & International Auctioneer Champions. They were judged on 4 categories: Crowd/Buyer Interaction, Performance, Relaying Bids and Communication with their Auctioneer, and Appearance/Presence. Also taking home honors were Mathias Donat of Saline, 1st Runner Up, and Kelly Merryman of Fremont, 2nd Runner Up. 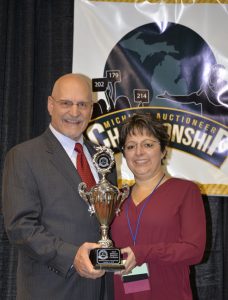 He has been a consecutive member of the MAA since 1977. He has served the industry by serving as Secretary of the Board of Directors of the Michigan Auctioneers Association twice in his career, one long stint in the late 70’s and 80’s and then again recently. In addition, he completed his CAI designation in 1988 and thereafter served on the CAI Board of Governors.

This was Bob’s very first time competing in the Michigan Ringman Championship and he said while waiting in the wings for his turn that he just wanted to go out and have fun. Looking at the results, it appears that he did just that.

Bob is semi-retired and always looking to assist any auctioneer or auction company in any way that he can. He lives in East Lansing, Michigan with his wife Sheila who is also an auctioneer, ring person, clerk and cashier. 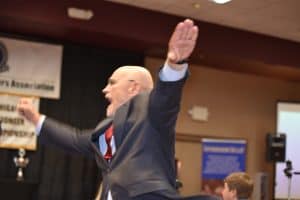