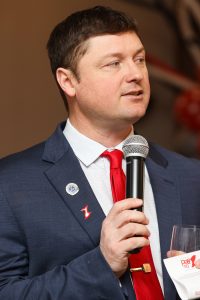 Wade Leist is a second-generation auctioneer from Northern Michigan, learning the livestock and estate auction business from his father, Frank Leist. After graduating from the World Wide College of Auctioneering in 2004, he has gone on to be named a champion auctioneer in multiple state, national and international competitions, including the Michigan Auctioneer Champion, the Greater Midwest Livestock Auctioneer Champion, the Midwest Auctioneer Champion, the No Borders Livestock Auctioneer Championship. He has also served on the Board of Directors of the Michigan Auctioneers Association and was elected President in 2016. He continues to serve on the magazine committee. In 2015, Wade began conducting a small number of large-scale charity auctions. Over the next few years, he would unlock the secret to sustained income through successful charity auctions. Wade and his wife Sarah reside on a farm in Boyne City Michigan with their four daughters.

Creating a Sustainable Revenue Stream Through Charity Auctions
Successful charity auctions begin with consulting. Putting your clients in the best position to succeed before their event is the key to long term event success. From securing pre-event donations, to implementing clear timeline transitions, you’ll learn how to better serve your clients’ needs and become invaluable to their future plans.